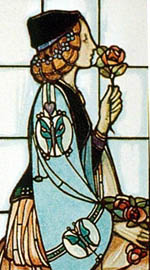 The Arts and Crafts Movement began in England in 1880's. Some key forces which gave birth to the movement were:

Defining the Arts and Crafts Movement

Walter Crane a leading figure in the development of the Arts and Crafts movement defined it as follows:

The movement represents in some sense a revolt against the hard mechanical conventional life and it's insensitivity to beauty. It is a protest against that so called industrial progress which produces shoddy wares, the cheapness of which is paid for by the lives of their producers and the degradation of their users. It is a protest against the turning of men into machines against artificial distinctions in art, and against making the immediate market value or possibility of profit the chief test of artistic merit. It also advances the claim of all and each to the common possession of beauty in things common and familiar.

The Principles of Arts and Crafts

In general, the development of the Arts and Crafts movement was led as much by political ideals and the desire to create a new order as it was by the nostalgia for earlier styles of architecture and craft.

The term Arts and Crafts does not define an artistic style such as Art Nouveau or Art Deco, the term refers more to a set of principles and attitudes in the mind of the artist or craftsman which involve not only art but also society and the interaction between the two. In the words of Michael Haslam:

The ideas behind the Arts and Crafts movement had more to do with the creation of the Art Object than with the Art object itself. Several Arts and Crafts objects even bear evidence of this concern with the processes of manufacture : for instance the hammer marks on beaten copper or silver were often left clearly visible, and mortise and tennon joints or dovetailing were exposed and made into prominent features of some furniture. As well as producing decorative effects, such details were intended to proclaim loudly that the object had been made by a craftsman using nothing but his hands and the simplest of tools.